A couple of weeks ago, I gathered up (nearly) all my eyepieces, Barlows and diagnonals, and took them to the local scope shop to trade in. I came out an hour later with a 2" diagonal, a 2" adapter for the Meade, a 2" adapter for the Skywatcher Dob, and two new eyepieces: a 17mm Speers-Waler (1.25", 82 deg FOV) and a 30mm Erfle (2", 74 deg FOV). (I kept the 12mm Vixen and a 7.5mm Plossl.) Tonight I went out with the Dob (the Meade had a little accident when I tried to upgrade the focuser...sigh) to the local park, and had a grand old time. 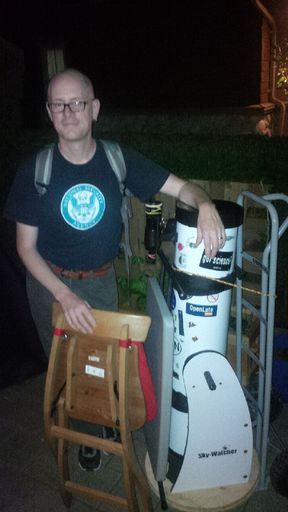 First off, I showed my Dad some stuff: the Moon, the Double-Double (couldn't split with the 12mm), the Double Cluster and M31. We took pictures of the moon with our phones, and I think they turned out pretty well. The Double Cluster was framed nicely in the 30mm, but looked even better in the 17mm -- that 82 deg FOV is incredible. After that, he headed home and I stayed out to geek out.

Moon: Saw a few craterlets in Plato with the 7.5mm Plossl. Neat to think that I was seeing features only two kilometres across!

NGC 6910: OC in Cygnus. Small but pretty -- I imagined it as a prancing horse with silver horseshoes, which has to be the single most Baroque and precious description I've ever come up with but what's a brother gonna do?

Pelican Nebula: Long shot, but why not? No sign, even through O3 filter.

M73: New Messier! Responded well to O3 but no sign of shape.

Home at 1am or so. Happy with new eyepieces.